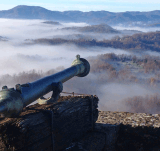 Doctor and pharmaceutical manager, he dedicated himself to university teaching, writing and poetry. He spent time with Licinio Cappelli, Luchino Visconti and Federico Fellini and published the Trilogia (Diario Postumo, Miserere Dei and Il poeta muore), for which Pier Paolo Pasolini considered him one of the greatest writers of XX century. From 1969 to 1973 he restored the castle of Castiglione del Terziere, in the municipality of Bagnone in Lunigiana, ancient stronghold of the Malaspina family, in a land between Tuscany, Liguria and Emilia Romagna. “I want to recreate a place of memory, where taking back the souvenirs of my people and my land. Remember is a fact of civilization. The Italian word ricordare derives from cor-cordis: because the ancients believed the memory lived in the heart”. In the castle he founded the Centro di Studi Umanistici ‘Niccolò V’, the Libera Cattedra di Filologia e Polifonia Vocale and collected an extraordinary collection of documents: a library full of manuscripts, incunabula, first editions, great writers’ autographs, an archive of papers about the relationship between Florence and the Lunigiana between XIV and XVIII centuries, paints and archaeological findings.
Choose means of transport: