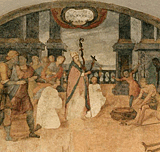 Agnolo Firenzuola was born in Florence in 1493, earned his degree in Perugia and then entered into the Vallombrosian Order. He was often in Rome and befriended some of the major men of letters of that period, among which Pietro Aretino and Annibal Caro. Following several vicissitudes, among which a severe illness, he was released from his vows and returned to Tuscany, where in 1538 he was nominated the “usufructuary and administrator of the monastery” of Vaiano. In this capacity he showed himself diligent and far from the merely speculative spirit that moved some of his predecessors, which had strongly damaged the monastery itself. These were happy and productive years during which he wrote his most well-known works, such as La Prima Veste dei discorsi degli animali and  I Dialoghi delle bellezze delle donne. After two years his title of administrator was removed, but he still remained pensionarius of the Abbey, fact that guaranteed him a life annuity, though modest, until his death in 1543.
Inside the Abbey the apartment that may still be visited is the so-called residence of the Abbot. Among the various books and documents exhibited, there are a few volumes of Agnolo Firenzuola, like the first editions of Prose (1548) and Rime (1549). For the rest the monastery visit is articulated as a path to illustrate the daily life of the monks in past centuries.
Choose means of transport: