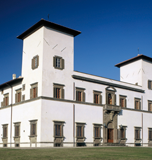 On the route from Florence to Siena, in the Val di Pesa, at San Casciano, there is Villa Le Corti, the magnificent 17th century residence of the noble Corsini family. Since the summer of 2014, the house has been hosting the prestigious Corsini Archive, made of 12,516 items gathering the documents of both family and farm. These include written proofs telling the history of Florence, Tuscany, Italy and Europe, since the Corsini family has always performed important political, diplomatic and ecclesiastical duties, including that of Pope, which also represents the family highlight. In 1730, after a four-month long Conclave, Lorenzo Corsini (1652-1740) became Pope at 78 as Clemente XII, and he maintained this position for ten years. A patron and a man of letters, whose qualities and financial skills were crucial for his appointment, he is nowadays remembered as the founder of the Capitoline Museums in Rome, the patron of the Trevi Fountain and of the new façades of the San Giovanni in Laterano and the Santa Maria Maggiore basilicas, the construction of the Palazzo della Consulta on the Quirinale hill, and also the building of the harbours of Anzio, Ravenna and Ancona. Clemente XII is buried in the magnificent Cappella Corsini at San Giovanni in Laterano; since he was a Prince of the Church, his family inherited the princedom.