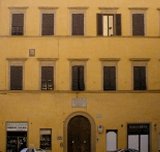 The marriage of Robert Browning to Elizabeth Barrett was carried out secretly in 1846, because of her father’s strong objections. The Brownings reached Florence when Elizabeth had already reached fame as a poetess, while her husband, who was several years younger, was as yet to become known. They were attracted by the history of the city, but also by the struggle for Italian independence.
The Brownings stayed in Florence for fourteen years, until the death of Elizabeth. They fit into the British colony of numerous ex-pats present there and befriended many famous Italians.
Elizabeth died in 1861 and was buried in the English Cemetery in Florence, which dedicated a plaque to her memory, describing her poetry as a golden band uniting Italy and England.
The home in Piazza San Felice was dubbed “Casa Guidi” by the writer herself to render the idea of a family residence. The Brownings purchased at a high price a few valuable pieces, but most of the paintings and furniture were bought at the Florentine secondhand stores. The décor was considered simple and functional. The owners, Landmark Trust and Eton College, have attempted to maintain the original atmosphere and avoid that the apartment take on the appearance of a museum. Some of the furniture comes from the Barrett family and some from the Browning family, but on the whole the apartment remains as it was in the nineteenth century.
The Landmark Trust, one of the largest British non-profit organizations dedicated to the conservation of historic buildings, makes the apartment available for short breaks, the proceeds are used for the maintenance and restoration of the apartment. Info: This email address is being protected from spambots. You need JavaScript enabled to view it. or 041.5222481
Choose means of transport:
Call
Send SMS
Add to Skype