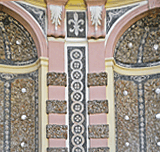 The Villa del Mulinaccio, home dedicated to the memory of Filippo Sassetti, was recently purchased in its principle nucleus by the City of Vaiano, which immediately began to enhance its value from an historic and architectural viewpoint, moving towards its use as a museum testifying its history and as a location for cultural events and state rooms for the city administration.
From an historic and architectural viewpoint, the villa with its gardens and annexes is a series of buildings of various periods and styles well harmonized in a way that it constitutes a coherent and unitary architectural complex. The villa was for centuries the center of an important farm and agricultural business that gradually grew into one of the largest farm businesses of the Val di Bisenzio. With its more than thirty-six farm units, it is the most vast and includes the largest number of farms. The renaissance nucleus of the villa is tied to the memory of Filippo Sassetti (1540-1588), who was navigator of the West Indies and had an adventurous life. Sassetti was owner of the villa and farm of Mulinaccio and addressed many of his letters there to his family. He wrote from India expressing the impressions of his travels in the elegant Tuscan tongue.
At the death without heirs of one of the Sassetti family, the Mulinaccio property went to Giovanni Strozzi: the Strozzi family was replaced by the Vaj family in 1660, which kept the agricultural estate up to the middle of the last century. The Vaj family made the extensions in XVIII and then the XIX centuries that have given the complex its current architectural and artistic appearance.
Choose means of transport: