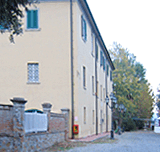 Born in Livorno in 1804, Guerrazzi earned his degree in law in 1824 at Pisa, where he had the fortune of encountering Byron. Interested in historical themes, he composed various works such as plays and novels; because of his ardent republican stands he was first banished to the border at Montepulciano and then imprisoned at Porteferraio, Elba. Guerrazzi was triumvirate of the Florentine Republic in 1848 together with Mazzoni and Montanelli and after that elected dictator. At the moment of Italian Unification he was named senator, but he withdrew from political life ten years later.
In the locality called La Cinquina, three kilometers from Cecina on the road that leads from San Pietro in Palazzi to the sea, you find the beautiful residential complex of Villa Guerrazzi. In 1868 Francesco Domenico Guerrazzi purchased the farm from a man of Livorno and here is where he led the last years of his life and where he died in 1873. The complex is made up of, in addition to the manor itself, various annexes, once used as granary, storehouses, stables, all immersed in a vast estate. Guerrazzi adored the farm, which he transformed into a villa thanks to a series of extensions and structural changes, even having changed the route of the road that originally passed right across the front of the house and straight on.
The descendents and successive owners continued making small variations to adjust the villa to their needs until 1975 when the City of Cecina bought it from the last owner. In over twenty years the complex has been completely restructured and now hosts the Etruscan Roman Archeological Museum, the Peasant Culture Museum, the City School of Music, the “Artimbanco” School of Theatre and a multi-purpose hall for exhibits and concerts.
Choose means of transport: