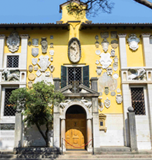 In January 1921 Gabriele d’Annunzio, a war hero who’d returned from the endeavour of Fiume, left Venice to reach his new “refuge” on the shore of Lake Garda: Villa Cargnacco in Gardone Riviera, which was “once property of [the] deceased Doctor Thode.
It is full of beautiful books and this opulence makes me tolerate the German traces I cannot easily suppress. The garden is mild, with its slope arbours and terraces. And the warm light makes me yearn for Rome. I will remain here for a few months, to finish the Notturno”, he wrote to his wife Maria Hardouin di Gallese.
He would not remain there for more than a few months, however, for the Poet decided to have his own house – his legendary houses were always rented – and so he bought the estate of Cargnacco, the cottages, the objects, the precious books which had belonged to Thode, and the garden, where the fragrance of the roses reminded him of the beloved atmospheres of his novel Il Piacere, set in Rome.
Amidst the lake’s tranquillity, d’Annunzio devoted himself to his last great work, which was composed of words and “living stones”, namely the transformation of Villa Cargnacco into the “Vittoriale degli Italiani”, a vast house-museum that he will love like “one of my poems, one of my dramas, any of my political or military acts, any of the proofs of my straight and undefeated faith”.

The Vittoriale is open all year round (except for 24th and 25th December, 1st January).

Summer opening times (from the last Sunday in March to the last Saturday in October)
Entryfrom 9.00 to 19.00
Closes at 20.00
The d'Annunzio the Hero Museum and the Priory can be visited from 10.00 on Mondays

Winter opening times (from the last Sunday in October to the last Saturday in March)
Entry from 9.00 to 16.00
Closes at 17.00
The d'Annunzio the Hero Museum and the Priory are closed on Mondays

To visit the Priory visitors must follow a guided tour which lasts about 30 minutes.
The number of tickets available for the house is limited by the number of guided tours available.
When visiting the d'Annunzio the Hero Museum and the Priory, all bags, cameras and similar accessories must be deposited in the cloakroom (free of charge).