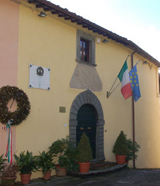 The Puccini Museum at Celle di Pescaglia, owned by the Lucchesi nel Mondo Association, is based in the house which over three centuries ago was the birthplace of Jacopo Puccini (1712-1781) the first of a long dynasty of musicians of whom Giacomo Puccini (1858 -1924) was the most famous. The great composer in fact spent his early childhood summer holidays with his parents in this lovely 16th century house, but in 1864, after the death of his father Michele, his mother Albina was obliged to sell the property to meet the financial burdens of her large family.

In 1973 however, it once again became “the Puccini house”, thanks to the generosity of the daughters of Ramelde, Giacomo Puccini’s favourite sister, who donated many precious heirlooms, and the vision of the Lucchesi nel Mondo Association which acquired the property. And so the ancient family home became a museum which over the years has been enriched and improved leading up to the latest complete restoration in 2008.

The museum is richly endowed, with plenty to interest amateur music-lovers and scholars alike: the visitor can follow both the private and artistic life of Giacomo Puccini, by means of many items which originally belonged to the great composer, letters and autographed musical scores, and original signed photographs. Of particular interest are the drafts of his first two operas, Le Villi and Edgar, as indeed are the letters to his sister confessing both joy at his successes but also his fears, and his bitterness at the poor reception by both audience and critics of the opening night of Madam Butterfly. Visitors to the museum can in fact see the piano on which this opera – one of Puccini’s most fascinating works – was composed. You will see also the bed in which he was born, his christening robe, and the cradle where as a baby he slept.

And for those interested in social history, the ancient kitchen with its great fireplace and original furnishings gives us a wonderful chance to go back in time to a bygone age.
Choose means of transport: