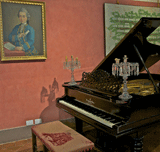 The Birth Home Museum is situated in an apartment on the second floor of a historic building in the heart of the City of Lucca where Giacomo Puccini was born on December 22, 1858. In this house the composer spent the happy years of his childhood and teenage years, where he first learned about music and submitted to the discipline crucial to his musical formation. In 1884 he found success in Milan, beginning his international operistic career which made him one of the most famous and beloved composers in history. Giacomo Puccini always remained very attached to this house, so much so that he wanted to retain the property even if he took up residence in other places.

The Birth Home, transformed into a museum back in 1979, re-opened to the public on September 13, 2011. Important renovations reconfigured the original layout of the home and created a completely renewed exhibit. The museum preserves original furniture, precious objects which belonged to the composer, such as the Steinway & Sons piano on which he composed Turandot, autograph scores of youthful compositions (his first work, Preludio a orchestra, re-discovered in 1999, the Mass for four voices dated 1880), many letters from and to Puccini (those from Giulio Ricordi are particularly noteworthy), framed pictures, photographs, sketches, memorabilia and important documents showing the composer’s work, such as page proofs of the librettos of Tosca and The girl of the golden west, rich in autograph notations and musical sketches.
From the donated collections, the costume of Turandot stands out—based on a sketch by Umberto Brunelleschi, worn by Maria Jeritza in the first staging of the opera at the Metropolitan Opera of New York (1926). Thanks to an agreement with Ricordi & C., in a room of the Museum named the Salotto Ricordi, it is possible to admire temporary exhibitions of priceless materials from the Archivio Storico Ricordi.

The Birth Home Museum of Giacomo Puccini is a central element of the Puccini museum, which consists of a journey along the footprints left by the great composer, to rediscover his personality, his genius, and his passion as the creator of extraordinary operas known all over the world.