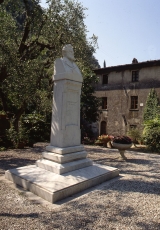 Giosue Carducci, Nobel Prize for Literature in 1906, was born in Valdicastello of Pietrasanta on July 27th, 1835. His father, after having worked in Valdicastello as a doctor for the French mining company Boissat in Autumn 1838 moved with his family to the practice of Bolgheri. Later on, the Carducci Family moved again to various centers of Tuscany.
Giosue Carducci came back to Versilia three times: on June 16th, 1877; on March 1st, 1890, when he went to see his birthplace in Valdicastello, and on March 29th of the same year.
After his death, on February 16th, 1907, the City Council of Pietrasanta decided to pay solemn tributes to the Poet. Giovanni Pascoli made the official oration.
On March 17th, 1907 the Birthplace of the Poet was declared national monument and in 1912 it was purchased by the City with the money received with a public subscription.
Since 1950, with a decree of the President of the Republic, his Hometown has adopted the name of Valdicastello Carducci and on the same year it has been established the “Giosue Carducci” National Poetry Award.
Choose means of transport: