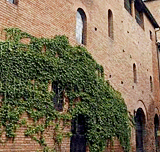 Giovanni Boccaccio (1313 – 1375), along with Dante and Petrarch, is considered the initiator of the Italian Literature. His works are many, the most important being The Decameron, a frame narrative of 100 novellas. Its taste for adventure and games, the exaltation of human intelligence and cunning, joined with a high sense of the language, make it one of the masterpieces of all times and the first great work in prose of the Italian literature.
The home, an austere little palazzo in terracotta brick, is situated in the middle of Via Boccaccio. The plain façade is interrupted by a graceful loggia opening upon the stupendous panorama of the Valdelsa hillsides sweeping all the way to San Gimignano. The home is now a museum. The main hall at the entrance holds exhibits regarding the life and works of Govanni Boccaccio, his period and the village of Certaldo. In the rooms on the ground floor there are rare and precious editions as well as the autographs of great men that have visited the Boccaccio Home. On the ground floor you may also see an audiovisual about the life and works of the Great Man of Certaldo and about the activities of the Giovanni Boccaccio National Institute that administrates the museum. Going upstairs one finds the large library; open to scholars, it hosts a unique collection of works dedicated to Boccaccio in the Italian language and in various other languages. A selection of these may be seen by all and are shown in a case situated in the frescoed room. This is the heart of the home. Here is the large fresco by Pietro Benvenuti, neoclassic painter, commissioned at the beginning of the nineteenth century by the marquise Carlotta Lenzoni dei Medici, who had the home restored and first donated the library, which has grown over the decades. On the top floor it is possible to visit the beautiful loggia that faces the stupendous panorama of the Valdelsa.
Choose means of transport: