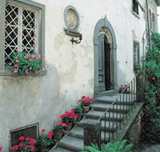 He passed in Castelvecchio, a place very close to Barga, the quitest time of his life.

Carrara-Cardosi's country house (XVIII century), in Caprona Castelvecchio, is the arrangement that the poet chose in 1895 as a residence for himself, his sister Mary and Gulì the dog. He called it “a hovel with a bit of garden and forest aroud” in a charming valley, full of voices, colors and lights. While staying in this house, between 1895 and 1912, the poet cultivated his love for Italian and Latin poetry, and here Primi poemetti (1897) saw the light, together with Canti di Castelvecchio (1903), Poemi conviviali (1904), and Nuovi poemetti (1909). This period coincided with the official recognition, rendered to the poet by the critics, as an innovator of Italian poetry.

He liked to see the happy country people such as sharecroppers and housewives, he studied their usages and analized the social and emotional problems of migration. He absorbed the migrant's language, which was frugal and rich in metaphors, and transferred it into his poetry with vivid incisiveness, in a brilliant synthesis of continuity and break with the classical tradition. The images of the usual farm work such as plowing, harvesting and sowing, in Pascoli's poems become events that transcend space and time. The sorrounding nature turns into memory, recollection and emotion, and the most common sounds like the Bear River's lapping waters, the Castelvecchio's spring bubbling, the voices of the countryside, the time marked by the Tower of Barga, become word, music, color, revealing unsuspected sensations and feelings. The house preserves the structure, the furniture, the layout of the rooms as they were at the time of Giovanni Pascoli's death, which took place in bologna on the 6th of April in 1912. Mary Pascoli preserved his property with deep affection for forty years and now rests next to her brother in the chapel of the villa. She bequeathed the property to the town of Barga which takes care of the buildings, the archive, which contains about 76000 papers, the poet's library, which consists of 12000 volumes. The museum house was declared a national monument and the natural environment that sorrounds it, a particularly interesting landscape.
Choose means of transport: