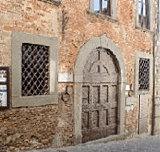 The Montanelli Bassi Foundation was constituted by will of Indro Montanelli in 1987. It is located in Fucecchio, in the ancient Palazzo della Volta, in the place where Montanelli’s ancestors lived in medieval times. They were part of the powerful consortium called “della Volta”. The façade of the palazzo still holds the traces of the preexisting medieval dwellings, even if the inside was radically restructured between the XVI and XVIII centuries. The Montanelli Bassi Foundation has among its goals, in addition to conserving and handing down to posterity the memory of Montanelli, the promotion of cultural activities and studies of the artistical and environmental historical heritage of the Fucecchio territory. It grants scholarships and awards such as the Indro Montanelli writing award and that entitled the Colette Rosselli award dedicated to illustrated literature for children.

The “rooms”
Indro Montanelli (1909-2001), who contributed financially to the restoration of the palazzo between 1990 and 1993, wished that his books, his papers and the objects that had been most dear to him be preserved in the palazzo of his ancestors. So after 2001 the “rooms of Montanelli” were created by transferring his Milan study and his Rome study to his place of birth. Both studies preserve many valuable evidences related to the life and career of the famous journalist.

The Foundation also has a library with 12 reading seats and an auditorium where cultural meetings are organized. It preserves, at last,  an ample collection of paintings and drawings of the artist Arturo Checchi.
Choose means of transport: