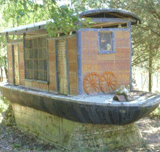 Villa Tintori is situated in the northern outskirts of the Province of Prato near the town of Figline. The building, dating to the early XX century, was purchased in 1935 by the artist and restorer, Leonetto Tintori, when he was married to Elena Berruti and it was his residence until his death in July 2000.
The estate, buildings and everything contained therein is owned by the City of Prato following a deed of gift dating 1988.
Outside it is surrounded by a park where about three hundred sculptures and reliefs have been installed. They are made of ceramics, cement, terracotta and bronze and were created by Tintori and other XX century Tuscan artists. Inside are preserved about five hundred pieces of archeological finds and ancient and modern art. Among the sculptures in the park there is one representing Noah’s Ark where the ashes of Leonetto Tintori and his wife are kept.

Behind the villa, in some annexes separate from the principal structure, specialized didactic activities are carried out concerning techniques of mural painting and the art of ceramics, as well as research activities for the preservation of mural paintings. Research activities are done in collaboration with many other international scientific bodies and are coordinated by the Getty Conservation Institute - Los Angeles (U.S.A.).
Choose means of transport: