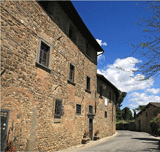 Nicolò Machiavelli (1469 - 1527), secretary of the Florentine Republic in the years between 1498 and 1512, is one of the greatest and most interesting figures of the Renaissance. A versatile and cultivated writer, he reserved most of his interest for politics, which he was the first to consider a science in itself.
The “Casa di S. Andrea” in Percussina, fraction of San Casciano, along with several farm complexes, was owned by the family of the Writer. It was here that he fled after his exile from Florence in 1512, when the Medici returned to the city. The farm, attached with the tavern called “the Albergaccio”, is described in one of his most famous letters, the one addressed to his friend Francesco Vettori, dated December 10, 1513. In this letter he describes his days divided between the occupations regarding the management of his properties and his evenings spent in the tavern playing tric-trac  with the host and the local butcher. However, in the nighttime he would withdraw to his library and pass the hours reading the classics, which inspired him to write the treatise, written straight off in a few months, entitled De Principatibus: The Prince, the work to which he owes his fame. After his death the home went to his heirs and along the hereditary line it came to be part of the heritage of the noble Florentine family, the Serristori. For the last few years it has belonged to the Gruppo Italiano Vini, which has some of its best vineyards here and has had it carefully restored. The premises of the villa and the splendid cellars may be visited and, through an underground gallery, also the tavern described by Machiavelli himself. This has also preserved its atmosphere intact through the centuries.
Choose means of transport: