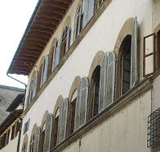 The XVI century  Palazzo Da Cepparello (later called “dei Da Verrazzano” and in the XIX century “dei Casamorata”), close in style to the type of buildings done by Giuliano da Sangallo and by Baccio d'Agnolo, was purchased in 1946 by the writer Piero Bargellini (1897 - 1980), becoming state apartments for fulfilling his literary and civic duties.
The Study is the most characteristic room, because it still has the ancient, remarkable dimensions and very high caisson ceilings. A magnificent cycle of six large XIV century frescos may be admired that were detached from the Chiesa delle Busche in Poggio alla Malva. However, it is not beauty that has made memorable these rooms, but the indefatigable activity of Bargellini. Appointed Councilor responsible for the Fine Arts from 1951 to 1956, Mayor of Florence in 1966, member of parliament for many years first in the Senate and then in the Chamber, his home was always open not only to friends, intellectuals and functionaries, but also to all Florentines who could ask him for advice or help. In the Study, where he worked up until the last day of his life, were written more than sixty books (Belvedere, I Santi del Giorno, Cento Tabernacoli a Florence, La Splendida Storia di Florence, Le Strade di Florence, I Medici), an incalculable number of essays, articles, prefaces, conferences, radio transmissions, and tens of thousands of letters.
For more than thirty years the Study was a stage for the encounter of writers and artists. Many were also personalities of cinema and theatre: Spadaro, Carla Fracci, Volonté, Rosi, Jean Gabin, René Clair, and Rossellini. In memory of this rich cultural life, in these rooms left unchanged, are exhibited hundreds of letters and inscriptions dedicated to Bargellini.
Choose means of transport: