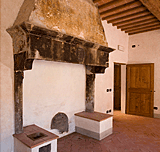 Jacopo Carucci, called Pontormo, (Pontorme, Empoli 1494 – Florence 1556) is among the greatest artists of Italian art: the emblem of that extraordinary season that Giorgio Vasari called the “modern manner”. He was born in Pontorme in the immediate vicinity of Empoli. The series of misfortunes that afflicted the outset of his life influenced and disturbed his whole existence. However, literature may have insisted upon the pathologies of his psyche too much. Certainly his expressions reflect (in terms of the highest poetry) his aloof meditation. His works, audacious and anti-conformist, are among the absolute apexes of the XVI century.
The home that was identified as being the birthplace of Pontormo by ugo Procacci in 1956 is now at an advanced stage of restoration. The City of Empoli, who owns it, intends to make it a commemorative place. The interior decoration will be evocative of the epoch in which Pontormo lived. There will be on exhibit objects and works that may recall the expression of the maestro; including, for example, facsimiles of the drawings done in preparation for the painting of the two saints for the altarpiece in the nearby church of San Michele in Pontorme. There will be a beautiful edition in facsimile of the famous Diary of the artist, desired by the City of Empoli. It will also be possible to view the archeological finds that were discovered during excavations for restoration work on the building. A room will be allocated to the use of modern didactic instruments and computer systems.
Last of all, in what was once the residence of Jacopo Pontormo there will be – to give it new life – an international center for the study of VI century art in the province of Tuscany.
Choose means of transport: