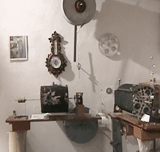 Raffaele Bendandi was born into a family of humble workers on October 17th 1893 in Faenza. He attended only primary level school before starting to work as a clockmaker. After a short while he changed his job by learning the art of wood carving. Self-taught, always eager to improve, day by day he enriched his library with tomes that are witnesses of his great effort and committment still today. Bendandi based his seismology on a single fundamental hypothesis: earthquakes are caused by the attractive forces exerted by planets on Earth and the additional effect of Moon’s gravitational pull. He was able to deduct the existence of other four trans-Neptunian planets beyond the already known planets of the Solar system. Already in the twenties he staged a “geodynamic” observatory, and, at the same time, he was building seismographs which he also sold abroad. Bendandi was following his dream: to be able to predict the happening of the, often tragic, natural calamities known as earthquakes. He also broadened his research field to the cosmic influences. He found out that the Sun, with its manifold radiations, is the ultimate regulator of the whole planetary activity and that it stands as the main cause and main regulator of every physical, electrical, etc. process. According to Bendandi it does exist a predominant solar influence on human health and a marked influence on brain cells of deviants and madmen. The latter, therefore, tend to become dangerous during periods of cosmic crisis in Bendandi’s opinion. He died on 1st November 1979 in his residence in Via Manara, Faenza.

The “Bendandiana” Association, created in 1983 to honour the memory of Raffaele Bendandi, includes in its aims:

- The promotion of initiatives aimed to foster the study and the valorisation of Bendandi’s work;
- To support research projects in geophysics and in every other scientific field pertinent with Bendandi’s own research;
- To collaborate in the proper functioning and activity of the Observatories;
- To organize any possible initiative aimed to attract young people toward scientific research topics.

The tour of the House is articulated in three thematic areas: