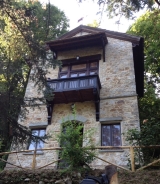 The Studio Fildadelfo Simi (1843-1923), the painter of the late Macchiaioli period, had had built based on his project in Stazzema - Alta Versilia - in 1890, came to us almost intact, both in its structure and its furniture.

The painter used to spend here long peaceful times, as an alternative to the more intense times of his Florentine life, and here he found the inspiration for many of his masterpieces. He transferred in them the landscapes, the models and the situations of farm life, in line with the Macchiaioli trend of en plein air painting.

Of Filadelfo’s two children, Renzo (1899-1943) and Nera (1890-1987), it was the latter who continued her father’s art both in his painting style and in teaching, in the renowned Florentine Studio in Via dei Tintori and in the Studio in Stazzema. She continued to teach the Jerome method, her father had learnt during his years in Paris.

Nera was a jealous custodian of many of his works, as well as the teacher of whole generations of Artists who stayed and worked at the Stazzema Studio. Nowadays in the Studio, which has become a House Museum, many works by Filadelfo and Nera can be found: paintings, drawings, sketches, experiments which – together with everyday use objects - create a late nineteenth century atmosphere, returning to the visitor emotions and memories of past times.
Choose means of transport: