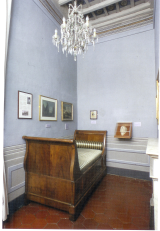 Situated at the right foot of the Spanish Steps, the Keats-Shelley House was the final resting place of John Keats, who died here in 1821, aged just 25.
From the outside, the eighteenth-century building is almost as it was when Keats arrived in Rome in the vain attempt to stop the fatal effects of tuberculosis. Open to the public in 1909, this house museum contains a generous collection of paintings, sculptures, manuscripts, objects and first editions of volumes by Keats and his fellow Romantics Percy Bysshe Shelley and Lord Byron.
The collection also includes a scallop shell with locks of hair of John Milton and Elizabeth Barrett Browning, a wax Carnival mask once belonging to Lord Byron and manuscripts by Jorge Luis Borges, Oscar Wilde, Mary Shelley, Walt Whitman, William Wordsworth, Robert Browning, and Joseph Severn, Keats’ faithful friend and travel companion.
In addition to the exhibition rooms, there are two spacious terraces boasting stunning views, a book and gift shop, and a small cinema room where visitors can watch an exclusive introductory film about the Romantics and the history of the Keats-Shelley House.
Group visits and talks are available by booking, and the rooms of the House and its terraces are also available for private hire by contacting us.
Choose means of transport: