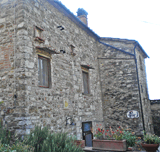 Address: via di Savignano 21 Savignano 59021 Vaiano (PO) Tel. +39 0574 988188
Visiting Hours: The home may be seen upon booking. Guided tours of the medieval village of Savignano and other places regarding Bartolini are available upon booking
Website:
Contact:

In this “humble and glorious cottage” (according to the happy definition of the archivist and historian, Cesare Guasti), located in the still intact medieval village of Savignano, was born Lorenzo Bartolini on the snowy day of January 7, 1777.
At the age of twelve Lorenzo went to Florence to attend the Academy of Florence; at twenty he went to Paris then capital of the figurative arts. At the School of David, he befriended the young Ingres and received important commissions. In 1808 Elisa Baciocchi, sister of Napoleon, appointed him teacher of sculpture in the Academy of Carrara. When the empire fell, Bartolini moved to Florence. He was disliked for his past connections with Bonaparte and for his innovative character: sustaining the imitation of nature against the neoclassic academic taste. His most famous piece, Trust in God (1835, Milan Poldi Pezzoli Museum) was from this period: a reduced version of this work exists in the Cariprato collection (Prato, Palazzo degli Alberti Museum). He began teaching in the Florence Academy of the Fine Arts in 1837, where he resumed his anti-classics battle. By then famous, member of the Honour Legion and the French Institute for the Fine Arts, Lorenzo Bartolini was considered the real successor of Canova. His death in 1850 prevented him from finishing the monument to Columbus in Genoa and that of Prince Demidoff in Florence.
According to the narratives of Giorgio Vasari in his famous work, The Lives of the most Excellent Italian Architects, Painters and Sculptors, Bartolomeo della Porta was also born in Savignano in 1469, as a plaque placed byAntonio Marini in 1855 also recalls. Bartolomeo was a pupil of Cosimo Rossellini and a follower of the teachings of Girolamo Savonarola whose precepts of austerity influenced his artistic activities. (Text by Adriano Rigoli)
Choose means of transport: