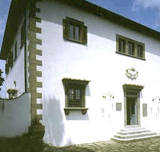 Address: “Villa le Coste” Via G. Duprè, 18 50014 Fiesole, Firenze, Italia Tel: +39 055 597095 Fax: +39 055 5978145
Visiting Hours: The Primo Conti Museum is open Monday to Friday from 9:00 am to 1:00 pm. Visits may also be made on Saturdays by prior appointment. Guided tours can also be made in the afternoon by prior arrangement. The Foundation’s Archive is available for consultation Tuesday to Friday, from 9:00 am to 1:00 pm, by prior appointment. email
Website:
Contact: Patrizia Balocchini Responsabile Amministrativo
Maria Chiara Berni Responsabile Archivio

The Primo Conti Foundation is based in the fifteenth century Villa “Le Coste” which was the Maestro Primo Conti’s (Florence, 1900-Fiesole, 1988) home for many years. Bought in 1945, the villa became the Foundation’s head-quarters when it was instituted as the Centre for Documentation and Research of the Historic Avant-garde Movements, in 1980. The centre represents the realisation of a long-cherished dream of Primo Conti “to preserve the record and testimony of the most important innovating movements of the twentieth century”.
The Foundation is divided into two sections: the Museum of the works of Primo Conti and the Archive.
The Museum and the Archive collectively represent a unique centre in Italy for scientifically retracing and reconstructing the activities of the historic Avant-garde movement which came to characterise so deeply the literary and artistic movements of so much of the century. The specific objective of the Foundation is, in fact, the study, promotion and sharing of the artistic and literary heritage linked to the figure of the Maestro Primo Conti, together with promotion of the artistic, literary and musical heritage associated with the whole period of the historic Avant-garde movements. The Museum of the Primo Conti Foundation has brought together sixty three paintings and one hundred and sixty three drawings by the Florentine artist. The works cover a time span starting from 1911, the year of his artistic debut with the self-portrait of surprising beauty and “maturity” of expression, through to 1985. The Museum makes it possible, through the works of Primo Conti, to study the development of the twentieth century artistic cycles in Italy and in Europe. From the momentous turning points in which this century is so rich, the Maestro drew his inspiration. The Museum’s rooms display the progression from his early studies of the human form, to his precocious interest in “fauvist” art, the prelude to a brilliant Futurist career. Conti was able to interpret the most vivid and fertile moods of Futurism bringing to life an anti-academic artistic form which is fresh and rich in poetry. Thereafter, always from positions of earnest and constructive debate the painter kept pace with modern art in its recovery of form and expressive technique. Ever youthful and willing to question the meaning of his works, Conti was an artist who anticipated and lived to the full the artistic and literary spirit of his time. Accordingly the last years of his life were characterised by vivid and lyrical paintings.
Choose means of transport: