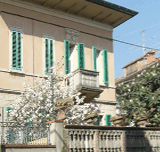 The Sigfrido Bartolini House (1932-2007) presents a mirror of this superlative, eclectic, and original artist: painter, engraver, and writer. This was the family home but first and foremost the studio and workshop for his many, varied activities, every room on the three levels of the house on Via Bigiano,5 is redolent of Sigfrido Bartolini. Arranged throughout the house are the Plaster Moulds (life-size) of Venus de Milo, the Aphrodite of Cyrene, and the Parthenon Frieze, attesting to his debt to classical antiquity; the collection of amphorae, coming from the various Italian regions to his admiration for the cultures of manual dexterity. The house became a Museum, allowing us to enter his world and that of Pinocchio, where the fairy-tale, illustrated by him in 309 black-and-white and coloured xylographies, mixes with concrete reality in the form of the artist's instruments: the chisels and gravers for wood-engraving; the work-bench with the wooden planks, printer's proofs, rollers, etc.; the model of the wooden puppet which he built, like Geppetto, in order to draw it; the objects which he depicted in the book to re-create the fantastic but very real world of Collodi's Tuscany; the press for copperplate- engraving and lithography. The Collection of paintings on the walls of the House is an intriguing and largely new itinerary through the artist's works: from large, detached Frescoes, to the fascinating Monotypes, from Xylographies and their related Stencil, to Oils; while also from maestri such as Sironi, De Chirico, Soffici, Maccari, Viani ect.. In short, the visitor is offered an original and fascinating permanent exhibition with nothing of the cold context of a museun display. The well-furnished Library, the Twentieth-century Magazine Collection, the Archive, and the Epistolary Archive of Sigfrido Bartolini offer both the curious visitor and the scholar a panorama and supporting records of that part of twentieth century Bartolini had a part in forming. Also on display are the 14 Modern Stained-glass Windows of Lead-bound Glass Tesserae which he created in 2005 for the Church of the Immacolata, some 200 metres from what is now his house and museum; they were to be the last large-scale project before his death.
Choose means of transport: